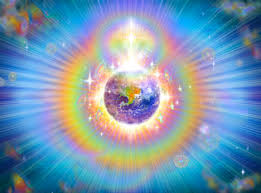 I’ve been working with the Ascended Masters and many lightworkers around the world for over 30 years to prepare myself and the Earth for the Coming Golden Age.

In January, I was told that more than 50% of humanity had chosen Love and the Earth had officially entered the 5th Dimension.

I’m hearing a lot of people focusing on the problems. and having a bit of trouble believing this. I want to tell you some of my experiences that tell me this is True.

I’d been living in Mount Shasta, California for the last 9 years, and I’ve suddenly been pushed out of the nest. I had good friends, interesting work, and a busy, productive life, but there were signs that it was time for a big shift. All of my big plans were suddenly hitting a wall. At the time of the Solar Eclipse, I was sitting on the Mountain with hundreds of others when I received the message that I was going to soon be leaving and I would not be back for a long time.

I had a vision that the Earth was crossing a bridge at about the same time in 2017. I saw us as about 2/3 of the way across. It suddenly made sense that we might be finding things not turning out the way we expected. And we were definitely going somewhere new.

Now, I know that not everyone was crossing the bridge at the same time. Some were already across, others hadn’t really started yet. But it was an interesting picture in my mind. By October, when I looked at that bridge again, I could see progress. Wherever it was that I imagined us being, it was further along the bridge. Maybe ¾ of the way.  I spent a month packing up home and office and completing as much as I could as fast as I could. Seeming obstacles melted away. I gave away a lot of “stuff”.

Now, I have to tell you that I was getting very clear signs that I was moving and where I was going, which was the Santa Rosa area. After the big fires started in that area, I was still willing to go when suddenly that door was not there, and another one opened and I ended up moving to the Oregon Coast, Lincoln City to be exact. Suddenly new doors were opening right and left and I felt that I had definitely made the right move. 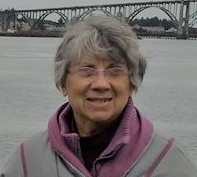 This picture taken by a friend after I arrived in Oregon made me laugh  – a clear confirmation about the bridge.

As these external signs were happening, I was getting a clearer and clearer picture of what I was here for and what I would be doing. I saw that there were thousands of people awakening and needing to step into their full mastery rather quickly. I knew that the Tools for Transformation classes and techniques that I had developed over the years were exactly what would be useful to share to help them clear and prepare very quickly. 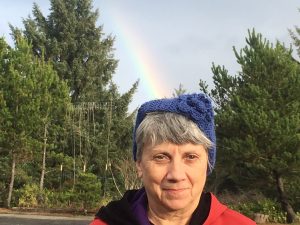 Here is another picture taken by a friend that shows how miracles (and rainbows) were flooding into my life. These included the many hours spent walking the ocean beaches and rain forest trails in my new home.

I also knew that the years I had personally spent getting in touch with my own I AM Presence and learning to step past limitations, beliefs, and fears, to take off the fields of protection and hiding, to step out in public as a living example of Oneness with God in a human body, so that others could see and know that they also could be ready and willing to do the same. Living in Mount Shasta, surrounded by awakened souls living as one with their Presence was a gift and a lesson plan.

I’d been trained by the Masters to see the God Presence in those who had attained that level of consciousness – and there were many. And many of them had been waiting till this very time to be awakened to this next level of Conscious Divine Embodiment to bring the fullness of their gift to the Earth.

So this is what I am now teaching and sharing – simple, fast, effortless “Tools for Transformation” and “Opening the Gift of Your Presence” and “Embodying Your Divinity”.

I Am meeting these beautiful souls nearly every day. Some are already well on their path, others are needing exactly this assistance to move forward with grace and ease on their own paths.

As we have moved into this new level of reality
there are some important things to pay attention to.

A – We need to let go of all that no longer serves us every day. With the new levels of Light constantly flooding the planet, more stuff that used to be tolerable, now must go.  We don’t even have to know what it is. We just must be willing and ask the Angels for assistance. I’m using Violet Flame for this. I’m learning as I go on many levels.

B – We might as well adjust to the fact that this new reality makes us feel like we are in kindergarten again. Because we are indeed just beginning to adapt to a whole new level of consciousness and what that means for our lives, our health, our work, our relationships and more. We don’t need to judge ourselves, but we do need to be willing to have “Beginners Mind”

C – There are so many opportunities opening up to us right now, it verges on overwhelm. I believe that we need to pay attention to a lesson I found in one of the Alice Bailey/Djwal Khul books. It says: “In the beginning the lesson was between good and evil, then it is the lesson of discerning between good and better, and then between better and best.”  There is a learning curve on this one, too.

E – There is sure to be much more than this, but I will add one more thought and that is we will also be given opportunities to work collectively to learn new levels of Oneness with groups and the overlighting Group Presence as well. As Barbara Marx Hubbard has taught for years, we will maximize our life purpose through the right group(s). Ultimately we will find the place of Oneness within the entire planetary field – a concept written of many years ago by Ken Carey in his book “The Starseed Transmission”.

I believe that the time of waiting and postponements is over. I will write more about this in a future post..

One last comment from Archangel Michael. This will be a year of Miracles and the immense changes that we hope for will begin to be discernible even in the political and the economic scenes by the end of the year.

2 thoughts on “Earth Has Entered the Fifth Dimension!”